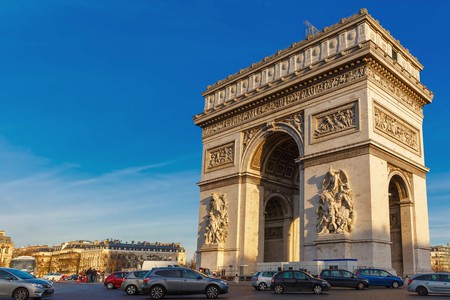 Paris attractions: One of the most historic markets in Paris, Marche d’Aligre has survived revolutions, riots and waves of gentrification. But whatever tribulations come their way, the vendors continue to flog their second-hand garments, bric-a-brac and cheap food on this stretch near Bastille. Your experience of this bustling market will hinge on which part you head to; the top of the street is a good spot for cheap-ish seasonal produce, while if you make for the covered Beauvau market you’ll find the dearer fishmongers and butchers.

Paris restaurant pick : It’s been a while since an outstanding restaurant opened in the historic Latin Quarter, which is why Cambodian-born Tomy Gousset’s new place has been such a hit. Here, the chef — who spent time in the New York restaurant scene — preps a first-rate small-plates menu that will please both vegetarians and carnivores. Standout dishes include the savory pancake with guanciale; a breaded free-range pork cutlet with a fried egg, black rice, red cabbage, and curry sauce; and a black chocolate tart with puffed buckwheat and cappuccino ice cream. It’s an instant local favorite.

To discover the legendary Paris cafes, the best place to start is the Boulevard Saint-Germain in the 6th arrondissement. This broad tree-lined boulevard is lined with designer fashion boutiques, prestigious cafes, and classic brasseries. The most celebrated cafes are the Cafe de Flore (172 Boulevard Saint-Germain), which was the meeting place of Jean Paul Sartre and Simone de Beauvoir, and the Cafe des Deux Magots (6 Place Saint-Germain-des-Pres), the haunt of James Joyce, Picasso, Hemingway, and other creative types. At both cafes, tourists are treated to a classic Parisian cafe experience, complete with waiters wearing bow ties (although the waiters have a reputation for their brusque service). The brasseries of Boulevard Montparnasse were also frequented by famous artists and writers. Le Dome in Montparnasse is a Paris institution (108 Boulevard du Montparnasse). In its glittering Art Deco dining room, the restaurant serves gourmet cuisine focused on seafood. Read a few extra info at Paris travel blog.

Paris shopping pick : Boulevard Saint Germain, Bon Marche & Rue du Bac: Running through the elegant 7th arrondissement, the heart of Saint-Germain-des-Pres and into the lively Latin Quarter, Boulevard Saint Germain is a street shoppers won’t want to miss in Paris. Starting at the Seine River in the 7th, this pretty street is lined with trees and beautiful Parisian buildings. It’s a great spot for home decor shops, fashion boutiques and gourmet food shops. As you reach the intersection with Rue du Bac and Boulevard Raspail, you’ll enter a fabulous shopping neighborhood. Follow Boulevard Raspail down to Rue de Rennes, and along the way you’ll find many interesting stores, including Genevieve Lethu for dishes, tablecloths and so on (95 Rue de Rennes). Plastiques (103 Rue de Rennes) is great for home gift ideas, including cool cheese trays, salad bowls out of clear plastic with Provencal flowers inside and so on.

A sumptuous palace that was once the home of France’s Kings, the Louvre is the most important of Paris’ top museums. Visitors enter the museum in the courtyard of the palace at the glass pyramid (designed by Ieoh Ming Pei in 1917). The Louvre Museum possesses more than 30,000 artworks (many considered masterpieces)-from antiquities to European paintings of the 15th to 19th centuries. It is impossible to see it all in one visit, but tourists can focus on a particular gallery, such as classical sculpture, Italian Renaissance art, or 17th-century French paintings, or take a self-guided tour to see the Louvre Museum’s highlights. The most famous piece is the Mona Lisa or La Gioconda (or La Joconde in French) painted by Leonardo da Vinci in 1503-1505. Other exceptional works are the ancient Venus de Milo sculpture, the monumental Victory of Samothrace of the Hellenistic period, the immense Wedding Feast at Cana painting by Veronese (1563), and Botticelli’s frescoes. Also a must-see is Liberty Leading the People (1831) by Eugene Delacroix, depicting the Parisian uprising of July 27th to 29th, 1830 known as “Trois Glorieuses” (“Three Glorious Days”). See extra info on FranceTravelBlog.com.